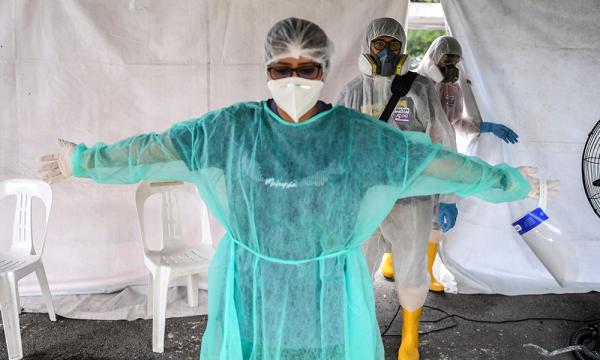 COMMENT | Six months ago, a tiny organism stamped its mark on the human species and became a pandemic that claimed the lives of more than 920,000 people around the world - while in Malaysia, authorities took action by introducing the movement control order (MCO) to combat Covid-19.

Even to someone with more than 30 years experience in the medical field, Covid-19 was something new, as we had not come across this magnitude of a worldwide infection in our hospital before.

As a practising senior doctor at a district hospital in a northern state, I was required to organise my team of colleagues to face the fight against the virus.

I realised that as a surgeon, I have had to deal with making life and death decisions many times before on patients who undergo major surgery.

However, this pandemic was a new ball game altogether. In the process, my level of stress increased many folds as not only did I have to worry about patients falling victim to the virus but also there was a high probability of it affecting our healthcare workers too.

I was deeply worried about the possibility of losing some of my colleagues during this fight against the virus.

Around the world, especially in badly affected countries, there were many healthcare workers who succumbed to the infection.

At least 213 healthcare workers have died from Covid-19 in Indonesia, including 107 doctors and 74 nurses, according to the Indonesian Medical Association. In India, it was reported that 196 doctors have lost their lives.

To my knowledge, a nurse and two doctors have succumbed to the disease in Malaysia to date.

Besides the concern over workplace safety, I had an aching heart over what might happen to my immediate family members who are quite elderly.

Suppose they were to pick up the infection from me through my work as a frontliner? Thus I had to move my mother-in-law from my home to other relatives' residence until this infection settles.

During this phase of time, I lost more than 6kg, my appetite decreased and for the first time in my life, I developed anxiety over what tomorrow’s challenges might be.

I was no more the confident surgeon who took the bull by the horn when it came to surgical diseases and conditions with which I am familiar, but instead was now facing a new enemy over which the medical fraternity had no control.

On top of that, most of the regular appointments and operations which were scheduled during this period needed to be postponed in anticipation of accommodating Covid-19-related patients and to reduce public movement.

Indeed overnight life changed all around me with the lockdown, empty roads, the need to cover up every orifice and wear a few layers of protective gowns at the workplace if we needed to treat patients. Every individual had to be seen as a potential infection case during this time.

In the initial stages, we felt lost.

However, day by day, we healthcare workers were able to become clearer and confident, thanks in part to the precise and timely instructions of the Health director-general and his team, who assumed greater importance given a chaotic political period that occurred at the beginning of the pandemic battle.

It was a herculean task getting the healthcare workers and citizens to come to terms with the severity of pandemics and unexpected change in lifestyle and habits.

The healthcare workers who were directly involved with infected patients needed to keep away from home, take many baths and wear many layers of personal protective equipment.

The movement of staff and the public were strictly controlled and monitored.

There were constant meetings and updates of the disease progression and various treatment options discussed at the state and national level in the virtual world to keep the infection at bay.

By the efficient coordination of the work systems of healthcare workers, public support and cooperation of citizens in following instructions meticulously, we were able to reduce healthcare workers and citizens fatalities in our beloved nation.

But the fight with the virus has yet to end - there is still a resurgence of cases in the northern region partly due to a relaxing of attitudes.

Even so, this difficult time has taught us important lessons. The fragility of the human race, the limitations of science and how travel, seen as a good thing, proved to be an important component in the rapid spread of infection.

It has also given us a time of bonding, a break from the rat race, and taught us to look within for strength and solace.

It's a fight we cannot walk away from but must face up to bravely.

DR TV NAGARAJAN is a senior doctor at a district hospital.