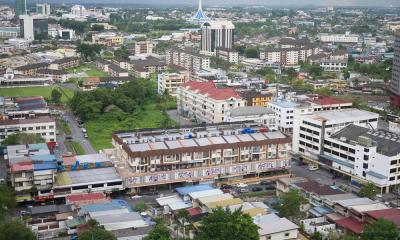 Jeffrey’s presence raised eyebrows but he said that he was there as he was hoping the prime minister would have an announcement about Malaysia Agreement 1963 (MA63).

“So, we went with the hope of some good news but ended up very disappointed”, he said, adding that he also felt let-down that the prime minister’s Malaysia Day speech in Kuching contained “no goodies” for Sabah or Sarawak.

Mahathir was on a one-day visit to Sabah.

“It is only right if the Sabah government tells us what was discussed during the meeting,” he was quoted by The Star as saying.

The disappointment of Sabah leaders is also shared by many Sarawakians.

What is truly sad is that Sabah and Sarawak seem to be dependent on leaders in Malaya for “good news”.

For too long, our legs are tied in such a way that the only position possible is to kneel, as if to beg for Putrajaya for “goodies”.

This was not what Tunku Abdul Rahman told us when he enticed Sabah and Sarawak to help form Malaysia in 1963. No, we have not forgotten the many promises made 56 years ago.

Sabah and Sarawak were promised ‘heaven’ but given ‘hell’. This is the general expression coming from many pro-referendum or independence groups in the Borneo territories today. And understandably so.

We were supposed to be equal partners but now, we have turned into beggars. Hopefully, that would not be for long as the Borneo territories are blessed with all that they need without having to beg.

In recent times, the list is too long for me to detail the many Pakatan Harapan’s unfulfilled promises to the people. The disappointment of Malaysians is not difficult to fathom.

For Sabahans and Sarawakians, the cries of disappointment and disillusionment are growing louder by the day. Not a day passes without someone commenting on social media of the unfair treatment, perceived or otherwise, Sabah and Sarawak had been receiving from Malaya over the past half a century.

Leaders of the new Parti Bumi Kenyalang (PBK) have been most vocal, declaring that their party would enter the coming Sarawak election on only a single cause – independence for Sarawak.

Last week, Sarawak received another damper, this time coming from Finance Minister Lim Guan Eng. He explained that Putrajaya was unable to fulfil its promises of 20 per cent royalty from oil and gas because of its massive debt inherited from BN. He blamed it on “BN’s legacy”.

I think we have heard this Harapan’s excuse all too often, so much so that it has become unbearable and intolerable.

Isn’t this yet another case of Sarawak being promised ‘heaven’ but given ‘hell’?

I have one important question for our finance minister and his Harapan colleagues: Was the Harapan manifesto going into GE14 created by the previous BN government?

Surely, Harapan must be aware of the BN’s huge debt, even then. That being so, why make empty promises to the people, including to Sabahans and Sarawakians.

Surely, Lim has to put on his thinking cap and come up with more solid reasons for not fulfilling Harapan promises. We are tired of listening to the unending moans on 1MDB.

As the late Sarawak chief minister Adenan Satem had said, “1MDB has nothing to do with Sarawak and we don’t wish to talk about it. It took place in Malaya and that is Malaya’s problem to resolve. Please don’t bring it to Sarawak."

Another issue which I took exception to over this past year was the repair of dilapidated schools in Sarawak.

Again, the finance minister came up with the same excuse, only this time with an added twist that Sarawak has to repay its loan to the federal government first.

We wonder whether Putrajaya is concerned at all for the thousands of students in rural Sarawak who have to suffer in squalor just to ensure they receive an education.

I am not interested in who is right or wrong in this case; what I want to see is that pressing and urgent matters, especially involving education of our children, are resolved expeditiously.

Putrajaya’s loan to Sarawak (another BN’s legacy) is a separate issue which has zero bearing on providing schools in good condition to children in Sarawak.

The onus is on Putrajaya to fulfil its responsibility as education is a federal matter.

Perhaps, the Sarawak government should seriously consider education autonomy. This would then enable Putrajaya to wash its hands off education matters in Sarawak.

I believe Sarawak is able to handle education just fine on her own. We also do not need unnecessary and silly policies like perpetuating a “medan dakwah”, black shoes and a fun calligraphy subject.

Just fulfil the 20 per cent oil and gas royalty to Sarawak and we can manage education matters on our own. There will also be no more quarrels the next time we need to repair our rundown schools again.

On the oil royalty for Sabah and Sarawak, the finance minister’s statement seemed to indicate that Malaysia would not be able to survive without oil and gas from the Borneo territories.

In other words, Lim is telling Sabahans and Sarawakians that Putrajaya needs the revenue from oil and gas from their territories to finance other priorities.

They promised 20 per cent but only retained five per cent. Now Sarawakians are asking why fight for only 20 per cent when 100 per cent belongs to us.

Sarawakians must be longing for the day to dawn when they could have 100 per cent of everything that their homeland is blessed with, without having to share with a peninsula across the South China Sea.

That is my message to Putrajaya and we wish that ministers like Lim would chew on it.

Finally, to my dear friends in Sabah, Jeffrey and Yong in particular, I don’t think it’s necessary to wait in the long queue to receive the grand old man at the Kota Kinabalu airport next time.

We don’t need to beg for what rightfully belongs to us.

FRANCIS PAUL SIAH heads the Movement for Change, Sarawak (MoCS) and can be reached at [email protected]