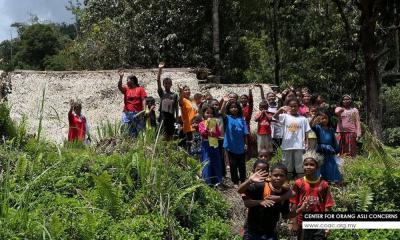 COMMENT | Those entrusted with the nation’s Education must study anthropology instead of trying to convert the Orang Asli. This is what I call “Poverty-of-Local Knowledge Syndrome”. The Ministry of Education, especially, needs to work harder understanding the link between education and cultural preservation while assisting with the sustainable progress of the indigenous peoples.

We are hearing reports of the children of Orang Asli dropping out of school and the Ministry of Education is merely lamenting about it. But why the high drop out rate? There is perhaps the main explanation: Because schools are based on Ketuanan Melayu-Islam Hegemony and meaningless to their reality. If you want children to stay in school, make the place exciting. Learn this from marketing and customer loyalty. Work hard, those in the relevant ministries!

The Ministry of Education should spend less time and effort turning schools into "medan dakwah". Instead, more time is needed in doing real teaching with rigorous, exciting content-learning.

Every culture has its own indigenous knowledge, grounded in ethics of authenticity and spirituality and a system of culturally-relevant technology. Use this notion of knowledge acquisition and construction to design curriculum. Not to destroy pride using a now detested Ketuanan-Melayu-based national curriculum. For example, why not teach in schools how and why the Malay sultans in the past took the Orang Asli as slaves.

In the case of understanding historical knowledge, for example, even the Orang Asli is puzzled why Yap Ah Loy and Sutan Puasa are claiming they "found" Kuala Lumpur. Be careful what genre of fake history shoved down the mind of our children. As we know, history is written by the winners, using well-paid scribes and fiction writers masquerading as historians. Isn’t this true of historical writing in Malaysia too? Tun Sri Lanang who wrote the Malay Annals (Sejarah Melayu) is one good example of such a historical-mythical-fiction author.

The shrewdest politician will find it most profitable to have all the races, religionists, and ideologues fight one another. “Historical facts” (an oxymoron) is used to ignite intellectual as well as political chaos.

We live in a world of multiplicities. Culture versus culture. Of hybridity. Diverse constructions of reality. Study this to educate. Has any of the people in the Ministry of Education sought to study the needs of the Orang Asli, ethnographically?

Educating is not about Islamising or Christianising the natives. Enough of this is done in the name of guns, guts, glory. Our educational policymakers probably lack interest in studying the anthropology of educating. Only interested in positions.

And how do you teach Orang Asli children to like school when you and your governmental gang bulldozed their habitat for profits?

RESIST! That's what you need as curriculum design for the natives in danger of extinction. Of the education of the Orang Asli too. I cannot imagine their children being turned into wannabe Arabs in the process of schooling as medan dakwah. A picture of absurdity! Stop sending preachers into the Orang Asli communities. Send anthropologists instead.

Send the good ones who will speak for the people. Not ones paid well by the ideologically trapped in a certain sociology of knowledge. Not the ones who sit all day in air-condition offices making policies for those living in the jungle. That would be like those predatory World Bank and IMF “experts” sitting in Washington, DC boardrooms who writes developmental policies for padi farmers in Sekinchan, Selangor and Changlun, Kedah. Neo-imperialist absurdity!

Schooling for indigenous people needs to enhance native cognitive abilities that emphasise in-depth local and spiritual knowledge, one that enables good cultural practices and instil pride. Not one that destroys culture and society. The Ministry of Education should worry about fixing Mat Rempitism first. That's your medan dakwah. That plague is the power of Malay subaltern narrative gone wrong. Perhaps the government should send gangsta rapper-anthropologists to study the issue plaguing this disabling aspect of Malay-urban-youth culture.

If the Ministry of Education consists of predominantly Malay-Muslim directors and policy-makers, we have got a major cultural diversity problem. We will have one-dimensional minds looking at circular problems through square pegs, offering solutions with one style of triangulation.

I spoke of anthropology in this essay. It is simply a field of study of human beings in their environment. Ethnography is the art and science of mapping cultural elements of the field of human study. I offer a poem on what ethnography means as I have understood over the decades of studying anthropology and doing ethnography.

Poetry on anthropology and “doing ethnography”

ETHNOGRAPHY ... as exciting as acting maybe..

and the familiar, strange

it is a study of cultures,

whatever they may be

wherever their locations may be

whatever we make culture to be

of going into the field as participant

of describing cultures, not judging them (yet),

but most importantly to learn a bit more

of what it means to be human,

of the tools we use to work and play

in the house that we and others inhabit

to construct patterns of meaning

and finally. naturally. to tell stories

in all their strangeness

and to become "one of them"

albeit not entirely being in them

yet be able to return to laughter,

and finally, to have that honour

of having "the anthropological veto”.

of phenomena around us

and discern patterns of meaning,

so that we will all not go bonkers/insane being aliens

and being hateful of things

we do not yet understand ...

This is what I hope our educators will one day master. It requires a political will to prepare teachers to go “into the field” and work with the “natives”. It requires empathy, sensitivity, and the urge to educate the children peacefully as the criteria for a successful teacher training system.

Content preparation alone is not enough, because this is just the information part of the social construction of knowledge. Education is a cultural and social activity in which we are in constant critical, ethical, creative, and futuristic dialogue with the junior members of society.

We need to have a serious national dialogue on this aspect of educational philosophy: the social and cultural construction of social reality.

Below are my thoughts on the idea of cultural change as it is impacted by globalisation and the rapid growth of technology, and our education system. One that has impacted not just the Orang Asli and Orang Asal, but all of us. Because we have been transformed and we need to understand what this means, culturally.

"Culture" has become an important debate in an age wherein boundaries continue to shift and peoples began to claim their rights as citizens of the country they are in, and the meaning of democracy is beginning to be understood. Culture, to me, is not merely about the house we inhabit or merely the tools we use, but a combination of both and more than this, it is about the way we enrich the sense of humanism we embody.

I am reminded by what the Spanish philosopher Ortega y Gasset said, "Man does not have nature what he has is history." This seems to be a notion of humanity worth exploring if our belief about human evolution takes into consideration how human beings take what is available form nature and transform the resources into tools and institutions, and then turn institutions into tolls that will transform human beings into classes of people who have the power to turn less powerful others into machines or automatons who have lost their soul to the spirit of the machine.

One can also argue that the origin of domination of human beings over others comes not via the manifestation of "evil within" as theologians would argue, but also a consequence of enabling technologies that speed up the enabling of "evil within".

As in the case of slavery, it is not merely through "evil" that slavery was born but through human being's control of knowledge and consciousness and the nature of how one defines each other. It is through the technology of "language" and the written and spoken word, and whoever has better control of these will determine the nature and nurturance of slavery.

In the history of Malaysia, the natives were once enslaved. The Orang Asli were, by the Malay sultans. We cannot allow the Master-Slave Narrative to continue in our modern era. We must first teach those in the Ministry of Education what ethnography of education means. Only when our educators have mastered this field of study will we perhaps, logically, learn from the natives, rather than try to save their souls, religiously!