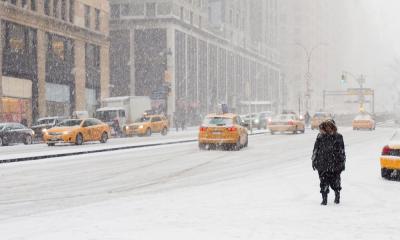 When hell freezes over, Malaysia will not be spared

COMMENT | The United States has been hit by the Polar Vortex, a phenomenon of extreme cold, with fatal winds blowing from the Arctic and spreading into the Western Hemisphere. In the last few days, the 'Windy City' of Chicago felt like Siberia. There were numerous deaths, with the temperature falling to as low as -31°C.

'Polar Vortex' sounds beautiful. Ice cold, classy. Yet deadly. As if beauty is a fatal wound. For two days, it was a frozen hell.

I thought of my beloved country, Malaysia and what it is doing in the discussion on sustainability that we are plagued with. I thought of the polls in Cameron Highlands and what we need to do urgently. Here are my musings, as I wait for the sun to shine brightly again next week.

We are so busy judging people religiously, we cannot see environmental issues developing and our surroundings crumbling rapidly. Is our educational philosophy founded upon sustainability, human rights, peace and justice? Or is there no vision for humanity?

Politicians must start promising to clean up rivers, plant more trees, promote green technology. Be mature in campaigning. Haven't we had enough pollution and congestion not to want to produce a third national car, which is probably going to be fossil fuel-based?

I call upon rulers, politicians, and corporations to start crafting sustainable policies rather than decide who gets to control GLCs. Greed will kill us all. Enough talk of who stole how much money. Get to work on comprehensive sustainable policies. But do we even know what that is?

We are living on borrowed time, on a borrowed Earth, yet we want to bring everything beyond the grave. We have to be reborn with radicalism. Any country that does not have a sustainability policy will be doomed to destroy its citizens. Demand your government show one.

Each nation must create its own environmental warriors, fighting the state and corporations who continue to despoil nature. We are ravaging this Earth as if there is no limit to growth, as those in the Club of Rome once said.

Pushed by the global elite who worship free enterprise and neo-liberalism, and who are interested only in huge profits, our lives are sped up. With that, the velocity of our destruction is guaranteed. Slow it down. We must visit the graveyard of the Luddites, asking them why their revolution failed.

They want us to be smarter than machines. As if we have become dumb and dumber, surrendering our autonomy to technology. Man is too fascinated with technology, but that fantasy will become a dystopia of frightening proportions. Wage war against AI, revolt against the robots. We must first have a philosophy of devolution, as in the French Revolution.

In 1974, when I was in school, I was shown two documentaries. I did not even recall the titles then, being swept away by fascination.

Now I know they were Alvin Toffler's Future Shock and Tony Buzan's narration of the power of the human mind in Use Your Head. Today, my lectures revolve around futurism, complex systems, post-humanism, the onslaught of AI and the need for human beings to retreat into Plato's cave. Time is the irony of our forced existence.

In opening my lectures these days, I am like a prophet of doom, a human voice of a Doomsday clock, a pessimist telling students how much time we have left on planet Earth and that there is no Planet B, and that we are all mutants and transformed beings sent down from another planet to be facing our next destiny, awaiting machines to produce machines that will produce more machines to escape this mechanised earth we have chosen to destroy.

Because we failed to heed Lao Tzu’s advice: "We carved the stone and thus began the act of destructing, signalling the Age of Destruction, Epoch of the Corrupted Machines." We deserve this humiliation. We are pseudo-spiritual beings not suited for this planet. We invent things to adapt, in the process, taking nature down and apart.

Now I am thinking of home again. The government have to respond to this question: why are we a dumping ground for other people's waste, sent from other countries such as the US, China, Australia? The minister in charge, please answer.

The victory of BN and the election of the first Orang Asli to Parliament did make me reflect on what is possible, if indeed we are to frame things differently. If we are to let the native advise us on what can be the best and most sustainable path to our developmental goals.

I thought of the rediscovery of a 'kampungism,' an alternate way of thinking about sustainable goals we must design and implement, away from the post-industrialist euphoria, artificial or augmented intelligence, and more government projects for mass production of things and more cutting down of forests. I thought of an imaginary conversation with the wise elders of the natives in our own land.

I believe the Orang Asli can explain this idea of human development better than any expert in any international development bank or in our Energy, Science, Technology, Environment and Climate Change Ministry. I believe that the Orang Asal of Sabah and Sarawak can teach modern 'civilised' man how not to plunder ancestral lands. I believe these natives can teach Putrajaya what ecosophical thinking means.

Ecosophy, independence, and freedom are not mere slogans, but an existential state of mind and a condition of lived democracy, one in which citizens are aware of the oppressive, environmentally destructive systems that are cultivated.

From ecosophy we might learn how to 're-villagise' and relearn what 'kampungism' means, a form of economic thinking that values pastoralism.

For too long the terms 'development' and 'national progress' have become meaningless mantras shoved into the minds of the natives, be they of the Orang Asal or the Orang Asli.

What interests these "ogres from tanah seberang" (as WS Rendra once said) is logging and plundering at the expense of the lives of the natives. The history of the Penan, for example, is a classic example of an ongoing saga of the displacement of the natives under the shibboleth of developmentalism.

Kampungism is driven by the philosophy of Eastern existentialism, sound metaphysical construct, a harmonious conception of kinship, a good balance of patriarchy and matriarchy, and an economic production system based on the good old farming system that is not bio-technologically driven. It is not a philosophy that kowtows to the dictates of Wall Street, the World Bank, and the International Monetary Fund.

Kampungism is not based on race, ethnicity, gender, sexual preference or greed, but the philosophy of human liberation and organisation. It has the potential of reorganising societies based on reason and a revolution in human consciousness. More than that, it can be inspired by the philosophy of ecological sustainability and closeness to nature as embodied by the Orang Asli and Orang Asal.

If there is a revolution of spiritual consciousness emerging out of the awakening of this spirit, we in the modern world plagued by the disease of corporate crony capitalism ought to rejoice.

No longer will the dance of the natives be one exploited for tourists, to showcase the shallow and meaningless idea of 'multiculturalism', but a new dance for a new era grounded in Mother Earth.

Are we there yet, talking about sustainability? Or are still busy trying to create more cars, more factories, more high-rise buildings, in the name of the life-threatening liberal-capitalist economy?