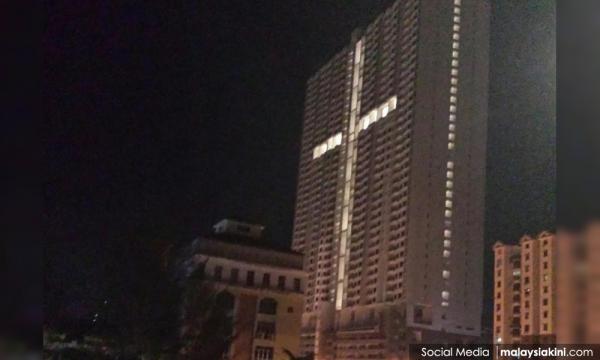 The cross and the deep-Salafi state

COMMENT | Once again, Malaysians are deeply bothered by a ‘cross on a building’. The most recent issue of cross-shaped lights on a condominium facade in Penang is reminiscence of the “Allah controversy” and the “Christianophobia seminar in UITM” I wrote about a few years ago.

I believe that as long as our educational and cultural institutions do not address the issue of the “deep Salafi state” in our social midst, we will continue to see the waves of radical Islamism hitting our multiculturalist shores, ending perhaps one fine day in a generation or so, a tsunami of race-religious inevitability.

The “evil cross” as semiotics of hate?

Given the mass-paranoia following the sight of the cross-lit building in Penang, imagine what the next agenda of the paranoids would be.

I had a series of humorous speculations I posted on social media, concerning the shape of the cross. I thought that soon, those fearful folks would warn their children about the blasphemy and danger of looking at anything that resembles a cross - KLIA seen from above. Window panes. A child’s bicycle seen from 10th, floor of the building. Hot-cross buns.

Or, even the small letter “t” of our alphabet. Imagine these extremist-Islamist parents one day banning kids from reading or writing the letter “t”? I thought of how I’d survive in a city where all the ’t’s are gone. Replaced with, say the letter “l” because it no longer looks like a cross.

It is ridiculous, seriously. But we must, as Voltaire the great French social critic once said, that we must in our prayers ask God to make our enemy look ridiculous.

Because it is a ridiculous situation with a deeply serious underlying principle - the continuous growth of the “deep-Wahabi-Salafi-Islamic-State” school of thought that has been permeating this multicultural, liberal and religiously tolerant nation, since the Islamisation Agenda of the Mahathir-Anwar Era, which was inspired by the political-ideological repercussions of the rise of the Egyptian Brotherhood, the Ikwanul Muslim and of course the birth of the first Islamic Republic, after the Iranian Revolution of 1979.

This is the butterfly effects of things, exacerbated by the Internet, and fuelled by the drive to make the world and every living thing be under one “Islamic State” ruled by this one “Khalifah”...