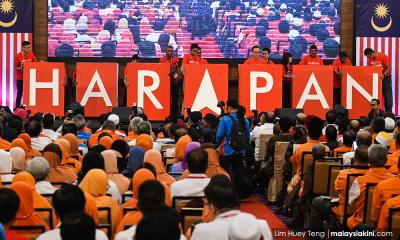 COMMENT | Like many Malaysians, left simultaneously bedazzled and fuming by desperate politicians jumping ship and welcomed aboard by those on the sinking 'Bahtera Merdeka', I was angry. I still am.

I wrote a series of social media posts to register my disgust towards the nature of Pakatan Harapan’s politics, and how this is going to lead the coalition and the country towards disruption.

The years leading to the next general election will see politicians busy focusing on how to kill each other politically, if not sending each other to jail, rather than helping communities. Time and resources to do good, whether utilitarian or ontological, will be wasted.

What exactly should be our agenda? What do the people want from those elected into office and paid handsomely to talk and argue in Parliament? What was the promise and how do we reclaim the agenda?

But first, some of my notes of disgust:

Where do we go from here – from the premise of change and the reality of disruption to a properly framed course of action? What ideas do we need to push in order for our nation to progress along the path of our common dream?

This is what we need to see evolving: brand-new political will, radical political change, an overhaul of the system and a fresh new mandate.

We need a prison complex big enough to incarcerate the long corrupt; a plan to redistribute wealth, dismantle educational apartheid, rewrite Malay and Malaysian history, and rethread the moral fibre of security personnel.

We need a return to the rule of law, to an agricultural society, to a cooperative system, as well as experiment with a radically new form of communal living.

We must dismantle systems that allow corporate giants to continue to prey upon the weak, strengthen labour, re-educate political officials on management, ethics, and political philosophy, and punish polluters and the destroyers of forests.

We need to separate religion and state, do away with useless cultural and religious rituals, and restructure society based on the principles of radical multiculturalism and the celebration of transcultural philosophies.

We need to cut down on TV time and introduce the reading of the great works of arts, humanities, literature, and philosophy, as well as curb rhetoric on Islamic or any religious state.

We need all these and more to turn the system on its ugly head.

As revered founding father Tunku Abdul Rahman – himself a victim of a political coup by racialised politicians – said in 1957 when he proclaimed the country’s independence:

”…But while we think of the past, we look forward in faith and hope to the future; from henceforth we are masters of our destiny, and the welfare of this beloved land is our own responsibility.

"Let no one think we have reached the end of the road: Independence is indeed a milestone, but it is only the threshold to high endeavour – the creation of a new and sovereign state.

“At this solemn moment, therefore I call upon you all to dedicate yourselves to the service of the new Malaya: to work and strive with hand and brain to create a new nation, inspired by the ideals of justice and liberty – a beacon of light in a disturbed and distracted world."

Indeed, when people believe in the future of their nation, it will be strong. That belief in Malaysia must be rekindled and recreated.

The agenda for true reform must be honoured by the present regime, provided that the component parties come together, study Tunku's vision, recall what they themselves promised, remove the ills plaguing communitarian and sectarian politics, and the mad spy-versus-spy world in which we scheme against one another and build personal and family empires.

As it is, the scenario does not look good, because we are moving towards yet another form of authoritarianism, don’t-care-for-the-people-ism, plus a whole set of 'isms' that are disruptive to what we wish for as an independent nation: sustainability, peace, and social justice.

It is a complex issue for a complex plural nation with complex needs, governed by complex people and a regime not willing to use political will to address such complexities.

Whereas life is quite simple. We feed our needs first, rather than our greed.