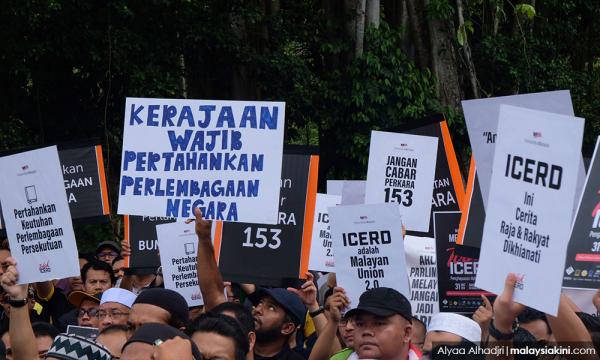 COMMENT | Isn’t the declaration of the International Convention on the Elimination of forms of Racism (Icerd) as proposed by the de facto national unity P Waythamoorthy, an Islamic document in spirit? One that has all the modern vision, mission and operating principles that all religions would promote?

Wouldn’t Prophet Muhammad ratify this human rights instrument if he were to be around today? Maybe the turban-wearing thick-bearded Malay-Muslims who carried the coffin to Parliament did not get to read closely what the noble UN document is seeking to remedy.

Maybe these protesters, an embarrassment to what Islam holds as principles of human rights, did not get the chance to understand what being a “nationalist” and being a “globalist” means in the context of being a Muslim. They have misused the coffin, in fact. An insult to the revered casket of the dead.

Maybe. One can be totally off in this cultural analysis.

One thing for sure: “Ketuanan Melayu” caused the people countless billions of ringgit at the end of the story. The head honcho of Ketuanan Melayu was chief of Ali Baba and the 40 Thieves International Money-Laundering Cartel.

Back to the Icerd-coffin protest. What is wrong with that picture? What is wrong, as a Muslim, in giving equal rights to all Malaysians? Did Prophet Muhammad teach us not to discriminate, degrade, alienate and dehumanise fellow human beings? Did he not tell us that the greatest jihad is the battle against one’s ego? Against a false sense of superiority? Did he not tell us, in his last khutbah/message on Mount Arafat that “an Arab is no more superior than any other race” except in his/her piety to Allah? Wasn’t that clear enough for the Ketuanan Melayu folks to abandon the idea of being racist Malaysians once and for all?

For 60 years, the old regime was not nice to the non-Malays. They institutionalised a system stylised after apartheid. The new regime should dismantle it...