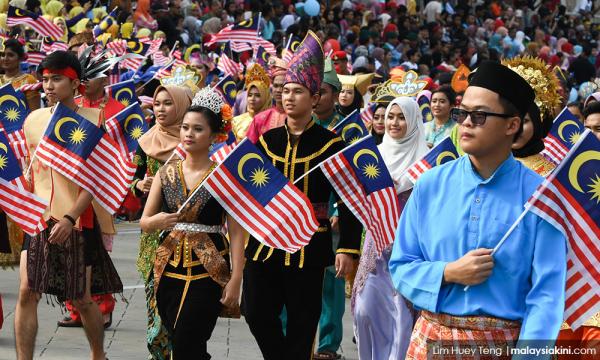 COMMENT | In a previous article, “Shame on you, my fellow Sarawakians,” I posited that the National Day, Aug 31, holds little meaning for Sarawak and Sabah.

“It is a day for Malayans to celebrate their independence day. Of course, Sarawakians and Sabahans can rejoice with Malayans on their National Day, but Aug 31 has no significance for those in the Borneo territories.”

Since then, I’m glad to learn that some prominent Sarawakians, including a state minister, also shared my views about Aug 31.

Deputy Chief Minister James Jemut Masing came out strongly to declare that “Sarawakians should not be celebrating on Aug 31 as it has nothing to do with Sarawak.”

“Aug 31 has nothing to do with us. It is Malaya’s Independence Day”, he said in a statement carried by a Sarawak news portal.

Masing also questioned the rationale for schools in the state to fly the Jalur Gemilang to commemorate Aug 31.

To make matters worse, he claimed that one particular school even committed a historical error when it trumpeted “61 years of independence.”

“Sixty-one years ago, Malaysia didn’t even exist. The new nation was formed in 1963 – 55 years ago. It’s a shame that the school authorities in Sarawak cannot even get this historical fact right”, said Masing.

He added that Sarawakians should be celebrating on July 22 instead, as that was the day Sarawak was accorded self-governance.

The minister’s statement attracted many responses from readers, with the majority agreeing with Masing that Aug 31 means nothing to Sarawakians and there was no need for any celebration.

One even suggested that the State Education Department should halt its directive to schools in Sarawak to commemorate Aug 31 as the National Day.

Interestingly, two years ago, Sarawak DAP chairman Chong Chieng Jen called on the state government to stop celebrating National Day on Aug 31, saying that “there was no justification and reason to waste public fund celebrating a day which has no historical significance for Sarawak and Sarawakians”.

He claimed that Sarawak has been forced to spend millions of ringgit to mark Aug 31 each year in keeping with a federal directive, which could be better used for rural development instead.

Two responses to Chong’s statement, presumably from Sarawakians, say it all for the majority in the hornbill state.

“This has nothing to do with patriotism. It’s not that we, in Sarawak, are not patriotic Malaysian citizens but it’s a historical fact. Aug 31 holds no historical meaning for Sarawakians,” one said.

“Chong is right. Aug 31 is insignificant to Sarawakians. We are already celebrating July 22 as the day of our self-governance and Sept 16 as Malaysia Day. That is enough,” another posed.

I couldn’t agree more. Why is there a need for Sarawak to celebrate three times a year – their day of self-governance on July 22, Malaya’s Independence Day on Aug 31 and Malaysia Day on Sept 16?

Isn’t that one too many celebrations? Explain that to a foreigner and he would probably be confused or have a good chuckle at the way we commemorate or celebrate the days of historical significance to us.

And unsurprisingly, even some of our fellow Sarawakians/Malaysians could be confused.

I wish to suggest to the Sarawak government to scrap Aug 31 as a public holiday although the date has been gazetted as such. There are already too many public holidays. One less will not make much of a difference to most of us, but it does in preventing the loss of man’s hours and productivity.

As a Sarawakian, I wouldn’t mind working on Aug 31. And you know why – it’s a holiday I do not deserve. On top of that, public holidays only make me lazy. The more public holidays there are, the lazier I get.

At times, we remember there is such thing as conscience. Why should I be paid for not working but lazing around on a holiday that I don’t deserve? I’m not sure whether this makes sense to others.

And I also don’t think that I’m less patriotic by calling for the scrapping of Aug 31 as a public holiday in my home state.

Patriotism to me is not just about attending the National Day parade or flying the Jalur Gemilang on my vehicle.

As patriotism is defined as an individual or a group with characteristics that show their love to the motherland, I’m not sorry to repeat that I am a Sarawakian first, Malaysian second. Hence, my motherland is Sarawak first, Malaysia second.

And patriotism to me means thinking and working hard as a private citizen on how to help create a better life and nation for generations to come, one that is free of societal prejudices, the greed of man, and power abuse by leaders, and which accords equal opportunity under the Malaysian sun.

Oh dear, I’m penning this at home on a national holiday – Hari Raya Aidiladha – another holiday which I don’t deserve and which is also a public holiday in Sarawak.

FRANCIS PAUL SIAH head the Movement for Change, Sarawak (MoCS) and can be reached at [email protected]